SUP in the city

You are here: Home > SUP in the city

Need a quick adventure close to home? Try stand up paddling (SUP) through Cape Town’s waterways; here you can experience the “Big 5” of a different sort, namely: pollution, poverty, gangs, graffiti and drugs – however this trip is not without its own surreal sense of beauty, as two wanna-be adventurers, Evan and myself, would soon discover. 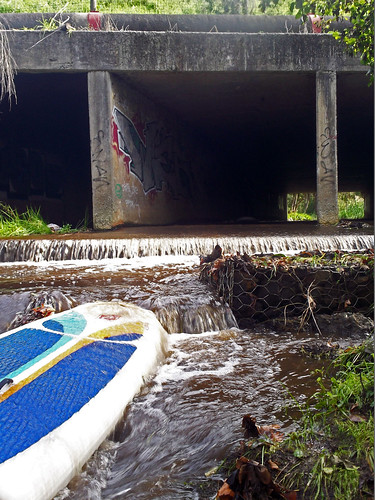 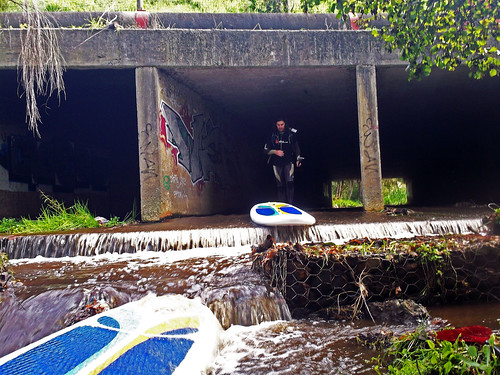 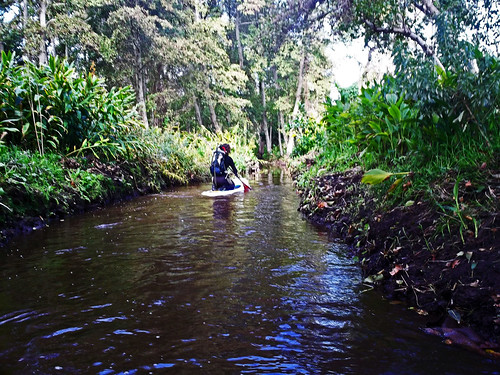 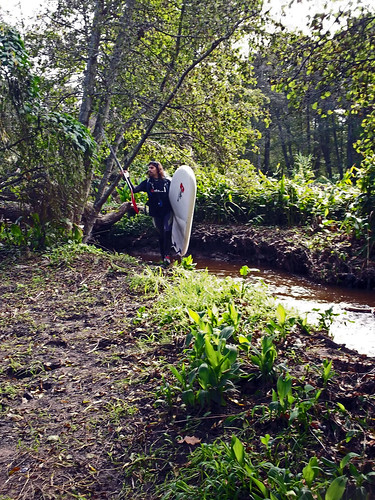 Why would anybody in their right minds want to do this? Well, Evan and I are a few monkeys short of a zoo. That said, I got the idea from the initiative: Taking back Cape Towns water-ways (http://peninsulapaddle.wordpress.com/2012-event/). Since 2010 a small flotilla of canoe’s and kayak’s (basically anything that floats) paddle from Muizenberg, through a network vlei’s, rivers and canals,(with a few portage sections thrown into the mix) before finishing in Milnerton Lagoon. Their annual pilgrimage aims to highlight the pollution in Cape Town’s water systems.

As I wanted to limit our portage sections and therefore negate the need for back-up crew, I used Google maps to plot a route different to the annual awareness event. Evan and I did a recce with a vehicle beforehand, stopping at a few crucial points to see if our plotted water-course would be navigable.

Our route started in Constantia, passing through some really rough areas; namely Lavenderhill and Manenberg in the Cape Flats, before finally hitting some open water in Zandvlei and ending in Muizenberg. Due to Evan’s back injury (I keep saying it’s his age) and, well, let’s be honest; my hangover (I was on leave at the time so I had an excuse), we postponed our paddle mission five days after some heavy rains. The water level rises and falls quickly in the canals and an extra foot of water would have prevented us carrying, dragging and pushing our SUP’s more than we would have liked.

I had only been on a fiberglass SUP once before and embarrassed myself completely. After my epileptic dance out at Long Beach in Kommetjie, with brief moments of paddling, between falling on my butt and slipping into the frigid water, accompanied with thrills of laughter from Evan, I half dragged, half drowned with the heavy board en-tow and washed up on the beach. Adding salt to my wounds; while I was packing up in the car park, a bright eyed little girl, tugging her mom’s coat tails asked, “Were you the one falling in the water the whole time?” That should have been a sign right there, to get some more practice, or give-up entirely.

Ignoring my ineptitude, I dived in anyway. Evan took this literally and went in head first at the start of our micro-adventure. Payback!

Our boards of choice for this mini-expedition: two inflatable SUP’s from Red Paddle SA. I tried the board out once before-hand and was blown away by how stable, durable and light is was, compared to my previous fiberglass one. Plus it packed up neatly into a backpack for easy transportation.

Special thanks to Red Paddle SA for sponsoring the boards.

I consider myself in shape; being round is a shape after all. Marginally out of breathe, using only a hand pump to inflate the SUP; my 105 kilograms caused no flex in the board while I splashed around in the surf.

Being an all or nothing kind of guy; in this case, I had all the gear but none of the experience, I have to admit I found it easier to paddle kneeling once we hit the murky stream. In my defence, the water was really shallow and the board’s fins, continual scraping and catching on rocks (and other disturbing obstacles) made it a bit tricky to maintain my balance. Evan did fare far better, (ignoring his head-to-toe dunking at the start). My excuse was, that his board ,(for obvious reasons) didn’t sit as low as mine in the water .

The route started off with a serpentine stream and muddy banks. Branches, rocks, debris and low water, made for some tough negotiating between paddling and carrying. One or two sections though, felt as if we were miles from civilization; thick foliage, shades of green plants and trees overhead, alluded to, two adventurers exploring the Amazon. These sections were short lived, as twice we had to jump fences and our tropical jungle quickly gave way to chest high bridges, plastic waste and suburbia.

Once we hit the concrete canals (which are around three metres wide and two metres high) paddling and carrying became easier. Colourful splashes of graffiti, some talented, broke the monotonous, grey, grimy walls – An imagined open-air art gallery for our uneducated critique.

Just as I gained some semblance of co-ordination, we set off a perimeter alarm as we glided through the backyard of a private property. We quickly scarpered it for a few hundred metres, before slowing down to our natural pace, out of breathe and giggling like school kids.

The high-light of the day, was when we came across a really impoverished community, who had set-up shacks on the opposite bank to a large plastic factory. A handful of kids followed us for a few hundred metres. We gave each of our three little followers, a quick mess-around on our boards. Their care-free laughter and smiles, that appeared like sweets in an opened wrapper, made the whole trip worth it. The incongruity of our two worlds, living on each other’s door step, but miles apart, felt like a hammer blow; a brutal reminder to be grateful for what you have and to be able to smile with what you are given.

On the outskirts of Retreat, four teenagers hunkered down behind a bridge; complete with the rebellious visage of untied shoelaces and peroxided hair, were smoking a bottle neck pipe filled with dagga. They were kind enough to offer us a hit ,(which we declined) and warned us through bloodshot eyes, that gangs further down were likely to rob us and stone us. In this instance, they were referring to actual stones.

We thanked them for their advice but decided to press on. Not long after, we were warned again, by a concerned, elderly lady. She was adamant that gangs in Lavender Hill would lighten our boards – by removing us from them permanently. And not only are our lives in danger, but hers as well for informing us. She begged us to “Please please, please, go no further.”

Evan and I concurred during our impromptu board-meeting and decided: instead of tempting fate, we would avoid these puddle-pirates and call it quits.

A group of youngsters, (one huffing glue from a plastic bag) were quick to latch on to us as we jumped ship and scuttled out of the canal. Eager to help us, clearly not out of altruism, but eyeing our gear suspiciously, they hovered around us like flies.

We stood out like two cats in a dog kennel and felt just as nervous. Imagine for yourself: two twits in wet-suites, appearing out of the blue, carrying massive boards in the middle of gangland. Traffic slowed, as bewildered drivers strained their necks to follow us. While pedestrians came to a complete stop, with furrowed brows and gaping jaws, they eyed us in astonishment.

Finding sanctuary in front of a cafe, we called my mate for a rescue. Braving rush hour traffic, Kevin was there in a flash. All we needed now was a shower with industrial disinfectant and some ice cold beers to sterilize our insides.

Posted on January 7, 2014 by seanfraenkel in Adventure, Microadventure, Surfing